Blogging has moved and The Barefoot Running Book has a new home!

As I mentioned in a previous post, I have moved my blog to the Barefoot Running University website.  The Wordpress format gives me more freedom than the Blogger format here.  Please update any links or blogrolls to reflect the move.
Also, The barefoot Running Book now has a dedicated website: http://tbfrb.com.  Go there to take a look at the first 52 pages of the second edition for FREE!
Posted by Jason Robillard at 4:52 AM 50 comments:

I have a new post, but it has been added to my new blog at Barefoot Running University.  To those that are following this blog, please migrate to the BRU site as I will be posting all new articles there.
Also, don't forget to add yourself to the Google Friend Connect at the new site!  It's my preferred method of selecting winners of my various contests.
Thanks!
-Jason
Posted by Jason Robillard at 4:55 AM 2 comments: 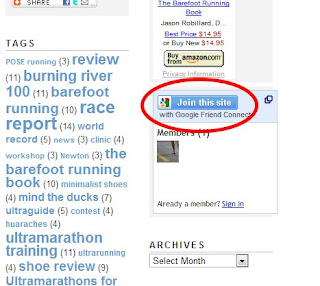 The winner will be randomly chosen this Saturday, September 11th.  Best of luck!

Also- the Barefoot Runners Society is now open to the public!
http://barefootrunners.org
Posted by Jason Robillard at 6:14 AM 8 comments:

I am in the process of integrating this blog and my website (http://barefootrunninguniversity.com).  The ultimate goal is to combine both sites at that address.  The process will likely take several days, so please be patient.
If you were redirected here from the Barefoot Running University site, those resources should be online by Monday evening.
Posted by Jason Robillard at 3:58 AM 3 comments:

The Greatest Ultramarathon Finish Ever! And a few more stories from the North Country Trail Races...

The North Country Trail Races held in Manistee, Michigan proved to be a memorable experience.  Personally, the race was an abysmal failure (more on that later).  Despite my own poor showing, this was a weekend filled with great stories.
The 50 Mile Finish
The headline HAS to be the finish of the 50 miler.  Jesse Scott, my occasional training partner, pacer at Burning River, and friend was running his first-ever 50 miler.  He battled with Brad Hinton over the last miles of the course that culminated in a neck-and-neck sprint at the end.  See the video here:

After some delay, Brad was awarded first (Brad in white), Jesse second (shirtless).  In my biased opinion, I think Jesse crossed the finish line first.  Unfortunately the officials (I believe the decision was made by Bart Yasso) ruled in favor of Brad.  Both Jesse and Brad were absolute class-acts and perfectly epitomize the sport of ultrarunning.
The finish was even more dramatic as Brad had went off-course very early in the race.  Apparently a marker had been pulled where we were supposed to make a turn.  Most of the field missed the turn, including Brad.  A small group of runners had familiarized themselves with the course or looked at the map posted at the turn and took the correct route.  Jesse was among this group.
For the record, I was among the group that missed the turn.  I was following another runner.  When we came to the intersection, he actually asked me where we were supposed to go.  Since there was no marker in sight, I assumed we continued on.  It did not occur to me to check the map.  Needless to say, I am not a good trail racer. :-)  The fact that Brad had to run more than 50 miles to catch Jesse for this finish was VERY impressive.
A dark shadow was cast over the moment by another runner that dropped out of the 50 miler earlier in the day.  Moments after the finish, this individual started yelling at the officials.  the gist of his rants revolved around Brad having went off course, therefore he should be given the win.  Moments after barking at the judges, the same individual got in Jesse's face and told him he had to concede because Brad went off course.  It was one of the most despicable sights I've encountered in an ultra.  I would give this individual some latitude for being caught up in the moment, but the same individual was repeatedly yelling at his crew and volunteers in a another recent race we both participated in.  I can accept acting like a tool on occasion, especially in the heat of the moment.  I can't accept someone being a douche globally.
Anyway, it was truly an awesome moment.  Jesse confirmed what I have long-suspected... his early successes in the ultra world were just a preview of things to come.  It was entertaining to listen to the rest of our "cabin crew" after hearing of Jesse's 3:45 split at the haf-way point.  I think most people underestimated his abilities... maybe because we often refer to each other as "hobby Joggers".  His progression as an ultra runner has been a huge inspiration for me to make a serious attempt at becoming a more competitive runner.
The Marathon
The marathon was won by Sam Darling, who was staying with us at a cabin nearby.  He produces a dominating performance of 2:55 on a fairly technical trail in hot, humid conditions.  I got to pick Sam's brain after the race... he gave some good advice that should help me in my quest to become a faster runner.
Alex Poulsen, another person camping at the same cabin, placed second.  Alex and Jesse often train together.  Alex is definitely a talented runner as this was his longest run ever.
One of the perks of DNFing so early- I got to see Shelly finish her second trail marathon in two weeks.  I am very proud of her accomplishments!  Here's the video of her finish:

Our "cabin crew" had many other great finishes, including Mark Robillard's time of 4:27.  While lounging around and catching up with many of my runner friends, I had the opportunity to see many people finish including Liz Bondar, Phil Stapert, Tim Adair, and Andy Grosvenor.
My Own Race
As I mentioned before, I DNFed after the first loop.  While I would like to say I suffered a catastrophic injury, I simply didn't feel like continuing.  Physically I was okay. Mentally I was shot.  I will be spending some time assessing exactly what happened, but I think I am just severely overtrained.  My decision to run so many long runs over a relatively short period of time has taken a toll.  Here's a rough breakdown of my long runs:
July 3rd -36 miles
July 8th- 68 miles
July 31st- 101 miles (Burning River)
August 14th- 26.2 (Fallburg marathon)
August 28th- NCT- (26.5 miles since I went off course)
There were several shorter runs thrown in there, but it was the long runs that took a toll.  I felt very strong prior to Burning River, but that race really wore me down.
I will be spending the next month or two running some easy, short runs to maintain fitness while recovering.  I will have the opportunity to test three or four new minimalist shoes over this time, so that will become a major focus.  I will also work on distributing the second edition of The Barefoot Running Book.
Of course, school will start tomorrow, which will take a chunk of time.  This gives me an opportunity to switch to non-running mode for awhile to give myself a mental break.
Crossfit Endurance for awhile.  All of my short race PRs came after following their daily programming.  In the absence of a speed training group, CFE should be an adequate template.
Posted by Jason Robillard at 9:11 AM 19 comments: