Newton Sir Isaac Review- Synopsis
Quality but fairly expensive cushioned trainer designed for a midfoot strike. This particular model is designed for runners that prefer cushioned trainers and is not intended to be a "barefoot" replacement.  The shoe would be a poor choice for barefoot or minimalist shoe runners due to a lack of ground feel, inadequate room to allow toes to splay, weight, and inflexible design. The Sir Isaac would be a very good choice for runners that do not want to give up cushioned trainers but are interested in changing to a midfoot strike.
Newton Sir Isaac Review- In Depth
When I decided to get into the reviewing game, I knew this time would come. I would have to review a shoe I did not like. It was inevitable, really. As a barefoot runner, every shoe will be inadequate in some way. Still, I knew I had something to offer my fellow barefoot runners. When conditions are either too cold or too hot, or the terrain is too rough, shoes are a necessary evil. I could help my barefoot brethren make an informed decision.
The moment I opened the Newton box, I knew this would be that shoe. There sat a giant, heavy, imposing piece of rubber that looked as if it could eat every other shoe in my collection. This shoe was the exact opposite of my ideal shoe. How could I possibly review this shoe? How could I even run in this shoe? 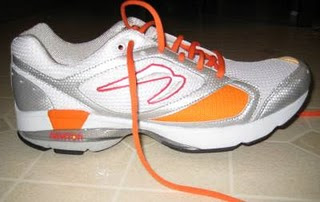